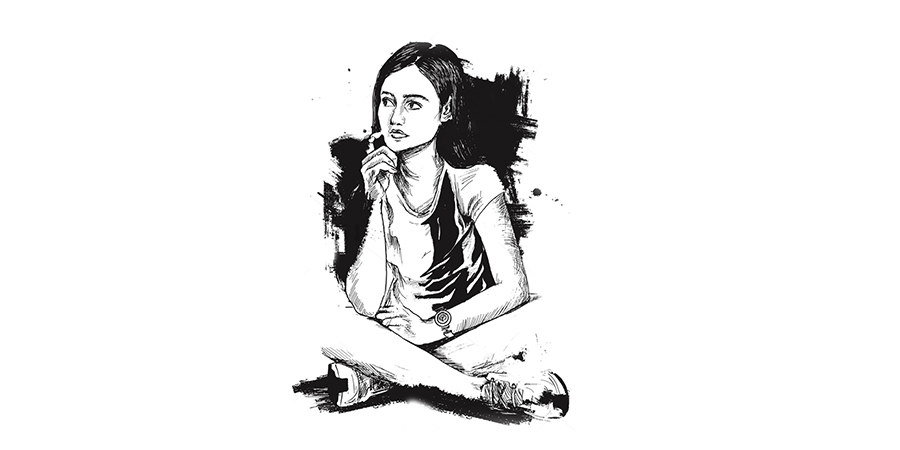 The descent of the soul plays a prominent role in Plato’s work (in particular in the Phaedo and the Republic) and was also widely debated among Platonists.

If the deepest nature of humanity extends to the unchanging and divine levels of being, into the immediate vicinity of the One, why are we nonetheless embodied, and spend most of our time in less than intellectual activities, far from wisdom as well as perfection of goodness and happiness? Why is human existence marked by vice and imperfection? For the Neoplatonists, this question is translated into the question of why embodied human beings were generated in the first place: that is, why eternal or timeless intellectual souls “separated” themselves from the Intellect and acquired individuality and bodily as well as temporal existence:

What is it, then, which has made the souls forget their father, god, and even though they are parts from this higher realm and altogether belong to him, be ignorant both of themselves and of him? The origin for them was audacity (tolma) and birth and the first difference and the wish to belong to themselves. Since they appeared to take pleasure in self-determination (to autexousion), and to make much use of self-movement, running the opposite way and making the distance as great as possible, they were ignorant even that they were from that realm. (Plotinus, Enn. V.1.1.1–9)

The overall normative picture where the higher aspect of the human being, the soul and especially its intellectual aspect, is better and more worthy than its embodied life is strengthened by the doc-trine of the “fall” or descent (kathodos, katabasis) of the soul. The generation myth or story weaves human imperfection together with individuation. As a part of the Intellect, each of us would have no true individual existence. The human striving towards individual exist-ence, towards being oneself, separates the souls from the original “togetherness” within the Intellect.

This urge and audacity (tolma) creates token souls and ultimately brings them to the utmost indi-viduation: to an existence as embodied, individual human beings. Our home and origin is the intelligible universe, gazing closely at the One or God, yet becoming a human being with a personality, individual characteristics and body, as well as a place and task in the universe, unrelentingly ties us to the realm below perfection.

Thus belonging to something high and perfect, without any individualiz-ing characteristics, is contrasted with being an individual with one’s particular existence and personal features. Personality and individu-ality are understood as essential to our nature, yet connected with imperfection. The same move that makes us what we are, embodied individuals, creates problems for the human claim to truth, perfect goodness and paradigmatic unity.

The descent myth is told as a history of our nature, but just like all creation or generation “histories”, its point is to explain human nature now, at this very moment, as well as for the moments to come. Th e individual immortal souls are above time but, through descent, their experiences and actions take place in temporal succession. The descent myth describes human beings as inhabitants of the realm familiar to us, the temporal and sensible, but also of the eternal and intelligible.

Its signifi cance is in explaining human inclination and capacity to intellection and to grasping beauty and goodness. The fact that we have our “source” in the intelligible explains our affinity to paradigmatic thought, that is, our natural abilities to think and to acquire truth or understanding. The metaphysical vicinity of human beings to the One explains why they can live, at least occasionally, morally, and why they have the means to accomplish unity, harmony and beauty in diff erent aspects of human life.

The descent myth places all human beings in individual yet parallel situations. Everyone is separated from original unity and goodness. Nonetheless there are personal diff erences in how virtuous and har-monious are the lives that human beings conduct. What explains this variation? Analogous to the tie that human functions and capacities have to metaphysics, the actualization of these powers is explicable through metaphysical notions. Our innate desire for and pursuit of things such as unity, beauty, truth and goodness are explainable by the idea that everything aspires and reverts to its source. The soul that has become individual realizes its own separation from the intel-ligible and yearns back to it.

Plotinus held that the human soul has an “unfallen” part, that is, that there is an aspect of it, the perfect intellect (nous) that does not descend but remains eternally contemplating the whole of Platonic Forms, although our everyday consciousness is not directed to this activity. Plotinus contends: “If one must venture to state what is the case against the opinion of the rest, not all our soul descends, but a part of it always is in the intelligible” (Enn. IV.8.8.1–3). This doctrine amalgamates the originally Aristotelian idea of a perfect, higher intellect thinking of everything there is to know into the Platonic doctrine of recollection, anamnēsis, claiming, broadly, that the fact that there seems to be innate knowledge, be that conceptual or logical or whatever, is explainable through the idea that each rational human soul actually has a share of that perfect intellect. Everyday reasoning is a further unfolding of this perfect ability in each and every human soul.

In The Republic and another well-known dialogue, Phaedrus, Plato discusses his understanding of rationality and the soul. The soul, according to Plato, can be broken down into three parts: reason, spirit, and appetite.

On the subject of fate, Plato’s views are roughly as follows. All things, he says, are within fate (Πάντα µέν φησιν ἐν εἱµαρµένῃ εἶναι), but not all things are fated (οὐ µὴν πάντα καθειµάρθαι). Fate, in fact, has the status of a law (νόµου τάξιν). It does not say, as it were, that such and such a person will do this, and such and such another will suffer that, for that would result in an infinity of possibilities, since the number of people who come into being is infinite, and the things that happen to them are also infinite; and then the concept of what is in our power (τὸ ἐφ’ ἡµῖν) would go out of the window, and so would praise and blame, and everything like that. But fate consists rather in the fact that if a soul chooses (ἕληται) a given type of life and performs such-and-such actions, such-and-such consequences will follow for it (τάδε τινὰ αὐτῇ ἕψεται). (Alcinous, Didaskalikos XXVI, 1-xxx, translation by J. Dillon, adapted.)

Plotinus looks at fate as an internal kind of law: “the universal law,” he writes, “is present in every particular (soul) (ἔγκειται γὰρ ἑκάστῳ τὸ καθόλου), and the law does not derive from outside the strength for its accomplishment, but is given to be in those themselves who are subject to it, and they bear it about with them.” It is more like, he says, “a natural spontaneous jumping or a passionate natural desire of sexual union”. In both these examples, what is stressed is the naturalness of the descent, which reminds us of what Plotinus said at the beginning,namely that fate and justice are “set in a natural principle which commands each (soul) to go in its proper order to that to which it individually tends”.What is peculiar with nature is that its movement is produced from within andthis is exactly what Plotinus wants to show regarding the descent: first, that the reasonfor the descent is to be found within the soul, hence that the soul is responsible for it;second, that the descent is a natural movement.

*This article is a excerpt from the book: Neoplatonism – Pauliina Remes and:
Plotinus on the Soul – Caluori, D. (2015). The human soul: Its descent and its confusion in the sensible world. In Plotinus on the Soul (pp. 134-151). Cambridge: Cambridge University Press. doi:10.1017/CBO9781316226681.008
Plotinus on the Descent of the Soul: Conciliating Moral Responsibility and Fate – Bernard Collette