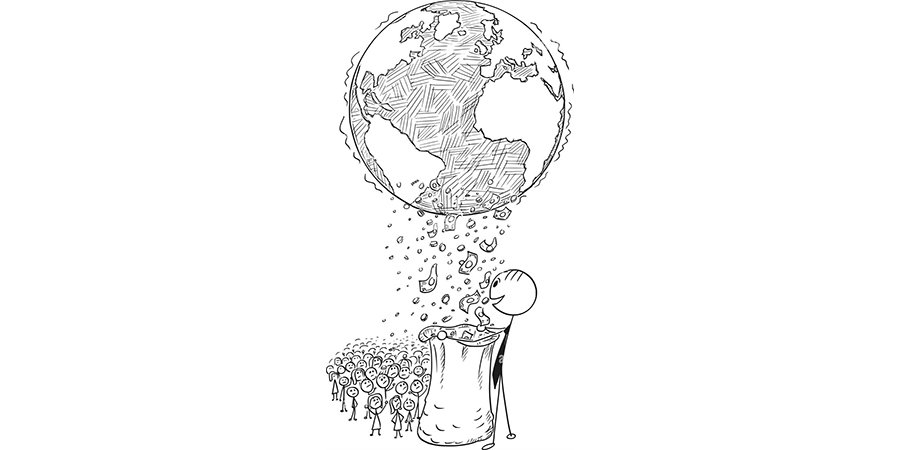 Until the eighteenth century, it was assumed that human beings are unequal by nature — i.e., that there was a natural human hierarchy. This postulate collapsed with the advent of the idea of natural right and its assumption of an equality of natural order among all human beings.

The classical formula for justice according to which an action is just when it offers each individual his or her due took on a substantively egalitarian meaning in the course of time, viz. everyone deserved the same dignity and the same respect. This is now the widely held conception of substantive, universal, moral equality. It developed among the Stoics, who emphasized the natural equality of all rational beings, and in early New Testament Christianity, which elevated the equality of human beings before God to a principle: one to be sure not always adhered to later by the Christian church. This important idea was also taken up both in the Talmud and in Islam, where it was grounded in both Greek and Hebraic elements in both systems. In the modern period, starting in the seventeenth century, the dominant idea was of natural equality in the tradition of natural law and social contract theory.

“ There should exist among the citizens neither extreme poverty nor again excessive wealth, for both are productive of great evil ” – Plato

Plato’s concern with inequality grew from the experiences of ancient Athens and Sparta. In his “Lives,” Plutarch notes that extreme inequality burdened these city-states. In Athens, “disparity between the rich and the poor had culminated, as it were, and the city was in an altogether perilous condition”; and in Sparta, there persisted a “dreadful inequality,” where “the city was heavily burdened with indigent and helpless people, and wealth was wholly concentrated in the hands of a few.”

In designing his Cretan city “Magnesia,” Plato is guided by the insight that excessive property and wealth, on the one hand, and extreme poverty, on the other hand, are a universal source of factions (staseis) in a society and its disruption. Plato construes the organisation of the economy of Magnesia in such a way that the extremes of excessive wealth and deep poverty are avoided. He starts with the geographical decision where in Creta Magnesia, the colony of Knossos, should be founded, and Plato decides that it shall be located far away from the coasts, so that for the Magnesians there will be no direct access to a harbour and to overseas trade.

The economy and society of Magnesia shall be based on the agriculture of an oikos-economy and not on overseas trading and the exchange of goods, but on labour on the fields. To prevent extremes of poverty and wealth, the agrarian economy has to be structured in a way that it supports an equalisation of landed property. The farmland shall be divided into 5040 portions of lots (klêroi), with one lot for each family (Nomoi V 739b-741e). Each land lot shall become the property of a single family, although it theoretically remains property of the state and the gods, so that the land cannot be sold by the family and the families cannot buy any other land lot or parts of it (Morrow 1993:95-112).

The acceptance of a lot is confirmed by a solemn religious ceremony with threefold sacrifices and prayers (Schöpsdau 2003:317f.), for the land has to remain in the family forever as source for the livelihood of its members. Two-thirds of the annual harvest of the land lot will be reserved for the members of the family and their slaves, and one-third is subject to compulsory sale to alien residents, that is, the metics, and foreign visitors. The reason for this regulation of distribution of the annual harvest is the fact that in Plato’s Cretan city the citizens are not allowed to work in any kind of profession of paid labour, which has to be done by metics. And as by the principle of ideopragy the citizens of Magnesia are not allowed to have more than one profession, that is, as farmers on their lots, they cannot become craftsmen or traders on the markets at the same time.

But let’s step forward, into the present day. In our modern times inequality has been on the rise across the globe for several decades. Extreme inequality is out of control. Hundreds of millions of people are living in extreme poverty while huge rewards go to those at the very top. There are more billionaires than ever before, and their fortunes have grown to record levels. Meanwhile, the world’s poorest got even poorer. Since 2015, the richest 1% has owned more wealth than the rest of the planet. In countries around the world, a small elite are taking an ever-increasing share of their nation’s income, while hundreds of millions of people are still living without access to clean water and without enough food to feed their families.

Today the world’s richest 1% have more than twice as much wealth as 6.9 billion people, while nearly half of the world’s population – 3.4 billion people – is living on less than $5.50 a day. Today 258 million children – 1 out of every 5 – will not be allowed to school. At the same time, public services are suffering from chronic underfunding or being outsourced to private companies that exclude the poorest people.

In many countries a decent education or quality healthcare has become a luxury only the rich can afford. The gap between rich and poor grows wider every year and leads to huge differences in life chances. It exacerbates existing inequalities in other areas, such as those based on gender, geography, ethnicity, race, caste or religion. Extreme inequality is not inevitable or accidental. It is the result of deliberate political and economic choices, and it can be reversed. And history has shown us many times what happens to cultures that do not voluntarily change the inequality.

This article is a short summary of: