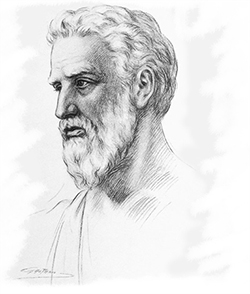 Pythagoras | God is a Mathematician

Western philosophy was in its infancy when Pythagoras was born. In Miletus, Greece, a group of philosophers known collectively as the Milesian School had started to seek rational explanations for natural phenomena only a generation or so earlier, marking the beginning of the Western philosophical tradition. Pythagoras spent his childhood not far from Miletus, so it is very likely that he knew of them, and may even have studied in their academy. Like Thales, the founder of the Milesian School, Pythagoras is said to have learnt the rudiments of geometry during a trip to Egypt. With this background, it is not surprising that he should approach philosophical thinking in a scientific and mathematical way.

Pythagoras was also, however, a deeply religious and superstitious man. He believed in reincarnation and the transmigration of souls, and he established a religious cult, with himself cast as a virtual messiah, in Croton, southern Italy. His disciples lived in a collective commune, following strict behavioral and dietary rules, while studying his religious and philosophical theories. The Pythagoreans, as his disciples were known, saw his ideas as mystical revelations, to the extent that some of the discoveries attributed to him as “revelations” may in fact have come from others in the community.

Featured Artist:
Jeff Rowland
Known for his rain-soaked oil paintings during a career than spanned over 30 years, Jeff combined a romantic 1950s feel with his signature rain motif.