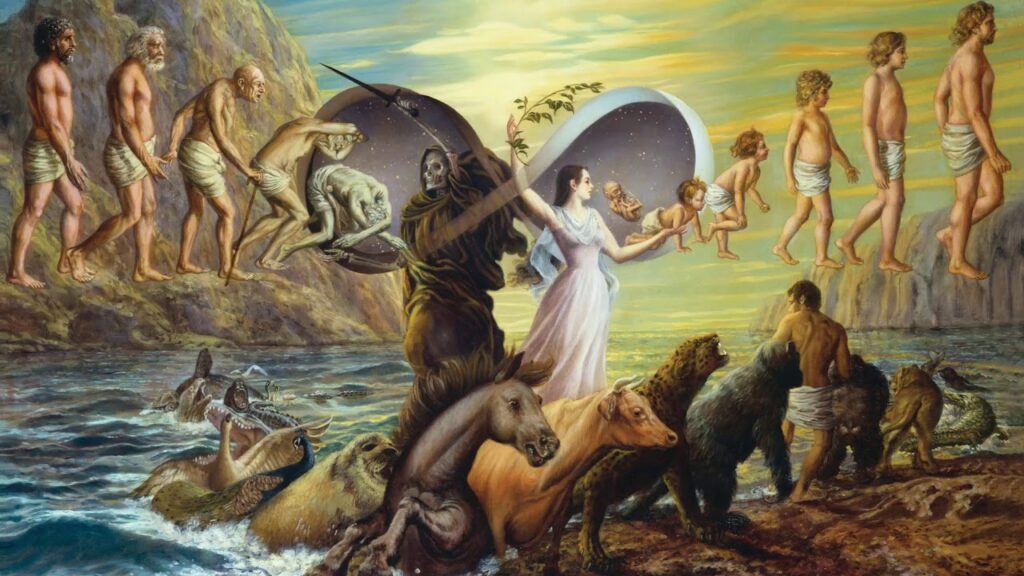 Many naturally assume that growing Western world belief in reincarnation is primarily based on a simultaneous increasing influence of Eastern religion and thought. This assumption is due, in part, that (many) Eastern religions have long known spiritual traditions that incorporate the concept of reincarnation.

Paying close attention, the current Western World “rebirth” of a belief in reincarnation (pun intended) owes much or most of the credit to the ancient classical Greeks and their fascinating views on the afterlife and reincarnation. In particular, we owe many of our ideas to the musings and discourses of the ancient classical Greek philosopher Plato (428/427 BC – 348/347 BC).

The idea of re-incarnation was not unknown to the ancient Greeks. The eminent philosopher Plato was a major exponent of this belief (as was Pythagoras and the Orphic mystery religion(s)). Plato attributed the idea back to his mentor Socrates, who he recounts saying upon his deathbed:

“I am confident in the belief that there truly is such a thing as living again, and that the living spring from the dead, and that the souls of the dead are in existence, and that the good souls have a better portion than the evil”. – Plato, Phaedo

In The Republic Plato develops this idea of the living coming from the dead even further. The Myth of Er is a story Plato has Socrates tell his audience, Glaucon, about Er, a man chosen to witness the workings of the Underworld. Plato uses this story to support his theories that humans have an immortal soul that will be reincarnated, and that despite destiny they still have a modicum of control.

Plato’s theory of re-incarnation is interesting, especially as it challenges established notions of fate and destiny. He tempers the idea of fate being inevitable by introducing the concept of choice, which bears striking parallels with the Bardo Thodol, the Tibetan Book of the Dead. Foolishness is often born from the follies of human nature, and Plato demonstrates this as each person chooses their new life. The first man to choose was blinded by the external ideas of power and wealth. He did not pause to consider the trials that come with holding power, nor the corruption that often goes hand in hand with it, and the full realization of his choice left him distraught.

The complete text includes many of the other choices from people of note; their earlier lives spurring them to choose unwisely. For example: Orpheus, angry after being torn apart by a mob of women, elects to be reborn as a swan (humans can re-incarnate as animals and vice-versa). He does this not out of desire to be a swan, but because his anger means that he does not want to borne from a woman, which was part of the Greek understanding of swan biology. Similarly, Agamemnon chose to be an eagle because of his hatred of humankind. For both of these men, the depths of their anger destroyed their humanity. Odysseus on the other-hand chose wisely. Despite the fact that he received the final lot, he carefully sorted through those discarded by the others. Tired after his life of adventure, Odysseus knew the value of a settled life that he could comfortably live out in peace and quiet. When he finally came across the life of a common man (one that all the others had viewed as worthless) he happily took it for himself.

The second choice given by Plato was the amount of water to drink at the river Lethe. While each had to drink enough to remove their knowledge of their previous lives, Plato implies that wisdom could remain:
“they encamped by the river of Unmindfulness, whose water no vessel can hold; of this they were all obliged to drink a certain quantity, and those who were not saved by wisdom drank more than was necessary; and each one as he drank forgot all things”. – Plato, The Republic. You can read a related article here; From Plato to Neoplatonism | Why are we here? | The descent of the soul

Men were seen passing into animals and wild and tame animals changing into each other. After their choice the souls drank of Lethe and then shot away like stars to their birth. There are myths and theories to the same effect in other dialogues, the Phaedrus, Meno, Phaedo, Timaeus and Laws. In Plato’s view the number of souls was fixed; birth therefore is never the creation of a soul, but only a transmigration from one body to another. Plato’s acceptance of the doctrine is characteristic of his sympathy with popular beliefs and desire to incorporate them in a purified form into his system.

The final chapter in the myth of the afterlife in the Phaedo is the rebirth of the soul into another life, completing the cycle – since the process of dying is followed by the process of coming to birth again. Socrates refers to the idea of reincarnation as an old legend (palaiòs logos) In his discussion of the effects of the mixture of body and soul, Socrates relates that one of the effects of the failure to separate them is rebirth into the forms of animals appropriate to the ruling passions of the former life. The gluttonous become donkeys and the violent become carnivorous beasts, while those who practiced unphilosophic virtue are reincarnated as ants or bees or even as humans again (81e–82b).

This process of the soul falling straightaway back into another body is explained thus: “The souls of most of the dead arrive there, and, after they have stayed for certain appointed periods, some longer, some shorter, they are sent forth again into the generation of living things.” The inhabitants of the upper realms live there longer than those of the lower realms and without the pains, but they are only more like the Immortals, not actually immortal themselves. When they have to fall down, they are forced to fall back again and are assigned to an appropriate status, depending on their nature and according to their deeds.